The Stabilization Support Unit has held a workshop entitled ‘’Deterioration of the Syrian
economy and the Economic and Political Repercussions of Caesar’s Law’’, which was
held in the participation of the Foundation for Political, Economic and Social Research
(SETA), Representatives of the US State Department, the Syrian American Council, and
the representative of the Syrian Emergency Task Force and attendance of representative
of Gaziantep Office of Ministry of Foreign Affairs of Turkey, representative of The National
Coalition for Syrian Revolution and Opposition Forces, Local Councils, Professional Unions,
the Free Aleppo University, Al-Sham University, Women Empowerment and Support Unit,
Assistance Coordination Unit and active local institutions and individuals from Northwest
regions of Syria.

The workshop took place on June the 17th, 2020, which is the official date for the
start of the implementation of Caesar’s Law. This date was preceded by a clear
deterioration of the Syrian economy and the Syrian pound that after which it
became important to plan to avoid the negative effects of that collapse on areas
outside the regime’s control. In light of the start of the US sanctions against
the Syrian regime, the importance of planning to neutralize civilians from any
potential impacts has increased.

The workshop was divided into two sections:

The repercussions of the collapse of the Syrian economy on the citizen inside
Syria.

Causes of the collapse of the economy and the solutions and suggestions that
can help civilians survive the economic collapse.
In this section, a group of Syrian economists, local councils and institutions, and
SETA foundation participated in the discussions.

Caesar›s Law and its economic and political repercussions

The possibility of neutralizing civilians from its effects and benefiting from the law
as a weapon in an economic struggle against the regime.
In this section, Representatives of the US State Department, the Syrian American
Council, and the Syrian Emergency Task Force participated in the discussions.

The workshop was held in Azaz and the participants from outside Syria participated
through Zoom platform. The workshop started by the opening speeches of Mr.
Mounzer Al Salal Head of the Stabilization Support Unit and Mr. Murat Yeşiltaş
Representative of SETA foundation. Simultaneous interpretation was provided in
the workshop that was facilitated by Mr. Mounzer Alsalal.

Mr. Bilal Salaymeh, an economy researcher at SETA Foundation, talked about
the implications of the collapse of the Syrian economy and the pros and cons of this
collapse on the citizens, especially in the north of Syria, providing some solutions/
suggestions such as replacing the Syrian Pound with Turkish Lira.
Then an open discussion took place between the participants/attendees about the
collapse of the Syrian economy before the start of the US sanctions while the regime
was falsely claiming that the deterioration of the economy and the Syrian pound is
due to the sanctions.

The reasons behind the collapse of the economy are summarized as follows:

Most of the agricultural areas are out of production, and the export of crops has
stopped

The collapse of the infrastructure that facilitates industrial production (electricity

Lack of natural resources in the hands of the regime

Deterioration of the Lebanese economy which is used to be an exit for the regime
regarding its financial dealings.

The Regime’s large debts, especially to the Russian government and other
supporters, to pay the costs of the war as well as the costs of bringing in mercenaries
to fight for it

Internal disagreements within the regime, especially the dispute with Rami
Makhlouf, who is the regime›s Economy man.

From the point of view of some of the participants, the replacement of the Syrian pound
with another currency (Turkish Lira) is one of the most important solutions to preserve
the savings of citizens. Others saw that there are fears/concerns regarding the currency
replacement process, which may make the Turkish government face future challenges
in the northwestern regions of Syria, as the process of replacement of currency may be
interpreted as administrative separation, alongside to that the process of replacing the
currency only is not sufficient in the absence of employment opportunities and a steady/
permanent income in Turkish lira or the dollar.

The importance of establishing trade, craft, professional, agricultural, and industrial
unions that preserve the rights of the workers in the region and determine their wage rates
in a currency other than the Syrian currency.

The importance of the existence of an economic and supply centralization that fights
price rises, monitors prices, and monitors and secures cash.

The importance of increasing humanitarian aid and increasing support of livelihood
projects and securing job opportunities, given that the region has a big IDP population who
live in camps, and that the unemployment rate exceeds 80% in it.

The importance of encouraging investments by providing facilities to traders/
businessman, increasing the level of safety in the region, fighting corruption and securing
the necessary infrastructure

Control of the crossings and managing the customs to determine what can be exported
and what can be imported, determine the currency that will be used for export and import
in a way that does not harm the region.

Establishing directorates in the local councils for economic development
The local councils talked about the difficulties they started to suffer from after the
deterioration of the Syrian Pound. Within only 17 days after the deterioration of the Syrian
pound, Loses of Bzaa local council for instance reached 40000 USD as they continued
to provide bread with a reduced price. They also talked about the difficulty of collecting
service fees since the majority of the population are IDPs and unemployed people.

Ms. Zehra Bell, the head of the Political Affairs Department of Syria in the US State
Department, talked about Caesar’s law underlining that it is not targeting civilians
and that its basis is the humanitarian impulse to protect Syrian civilians. She stressed
that the law does not prohibit food, drug, or humanitarian aid. She confirmed that the
law targets actions and activities that benefit the regime and that it aims to punish the
regime to put pressure on it to acquiesce the political solution process stipulated by
the Security Council Resolution No. 2254, in addition to that the law aims to force the
regime to change its behaviors and prevent it from targeting civilians with bombings,
arrests, and displacement.
Mrs. Bell emphasized that the United States is the largest donor in terms of providing
assistance to the Syrian people and that the sanctions stipulated in Caesar’s law do
not target one region without another, but rather targets those who Commit/have
committed atrocities against the Syrian people. She also said that the duration of the
sanction is five-years and have certain conditions, those sanctions either contribute
to changing the regime or changing its behavior, and in case the needed results are
achieved, there is no need for the continuation of the sanctions, and if the needed
results are not achieved, the five years will be possibly extended.

Mr. Adam Levy: Who is a specialist in the sanctions of the US government – spoke
about the fact that sanctions are focused on things and the bodies/parties that assist
the regime in his war against the Syrian people or help it with the reconstruction
process, such as aviation or construction sectors.

Mr. Muhammad Alaa Ghanem: Who is the Senior Political Adviser of the Syrian-
-American Council which played a role in approving Caesar’s law. He said that some
of the concerns and fears regarding Caesar’s law (including the concerns that the
sanctions would be the same as sanctions against Iraq) are right and legitimate but
he stressed that when reading the provisions of the law, we can make sure that its
provisions are already in place to protect the Syrians.
He as well stressed that the sanctions will target the capital and financial resources
of the regime and its senior officials, in addition to the countries that support it, and
that the military progress of the regime pushed it to think that it won a victory over
the Syrian people, so it began to await economic and political victory and the start of
the reconstruction phase, but Caesar’s law prevented it form that.
He affirmed that the law will target companies that may support the regime in
construction and engineering fields so that the regime won’t have any opportunity
in reconstruction and that the law includes provisions/conditions to protect the
civilians, such as stopping the bombings and release of the detainees. As for the fear
and concerns regarding some of the conditions and the duration; the law took into
account that changing the ruler does not necessarily mean change of the behaviors
of the regime/government, therefore conditions are placed to ensure that behavioral
change.

Dr. Murat Aslan: Who is a researcher at (SETA) Foundation for Political, Economic, and
Social Research – said that such sanctions would certainly be beneficial, but the problem is
with unintended consequences that may result from those sanctions. He stressed that the
people in the North of Syria, along with the rest, fear such sanctions, as those sanctions may
be negatively affecting the region. He added that if we want to start a process of political
and economic pressure, we must first consider the consequences, and not only focus on
one aspect. Measures must be taken to ease the concerns of the Syrian civilians at the
North. By that way, Syrians under the authority of Regime will be encouraged to press
the Assad Regime. Such measures require the action of all actors, including the USA and
Turkey. He also affirmed that a financial system based on self-sufficiency should be built
so there should be greater coordination and cooperation between Turkey, the US, and the
EU in northwestern Syria.
Mr. Asaad Hanna: Who is a member of Syrian Emergency Task Force, summarized some
of the recommendations, the most important of them is that the sanctions will target anyone
and any party who engages in activities with the regime, and this does not mean only the
international parties/companies, but even the crossings between the regime regions and
northwest/northeast of Syria, from where goods and materials subjected to sanctions
could be provided to the regime-held areas, so whoever carries out such actions will be
punished and this could increase the economic turmoil in these areas.
Mr. Hadi Al-Bahra: The Co-chairman of the Constitutional Committee said that all measures
currently taken by areas outside the control of the regime are temporary measures and
alternative solutions to preserve the value of the work carried out by citizens, they may not
be the ideal solutions, but they are temporary until the stabilization of the Syrian pound
whcih will not stabilize before the political stability. He also stressed the importance of
fighting corruption in the liberated areas to cut off any possibility of exceptions that could
be used by the head of corruption and tyranny from those areas.
Finally, Mounzer Alsalal, the head of the Stabilization Support Unit and his team,
thanked everyone who participated and contributed to the workshop, and stressed the
importance of coordination between political, international and local parties and the need
for establishing communication and discussion between them. Mr. Mounzer affirmed that
the Stabilization Support Unit will always try to be a bridge between them. 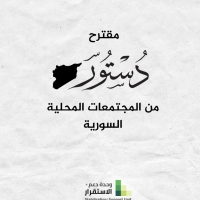 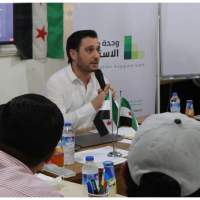